Tipa colorada (Pterogyne nitens) is a species of forest importance that belongs to the Fabaceae family, subfamily Cesalpinoideae. It is distributed from southern Brazil to Argentina, in the phytogeographic regions of the Yungas, Eastern Chaco District, and Paranaense province (Calzón & Giménez, 2011). According to the International Union for Conservation of Nature, it is in a "near threatened" conservation status (Espíndola et al., 2018). It has fine-textured wood, with yellowish brown sapwood, pinkish brown to reddish brown heartwood, and very attractive veined grain, similar to mahogany. It is used for furniture, fine carpentry, lamination, and tongue and groove joinery (Giménez & Moglia, 2003). It is a tree with semipersistent foliage, long and sinuous stem (7 to 15 m), heliophilous, which has a pioneering role in degraded sites (Giménez & Moglia, 2003).

In recent decades, the natural dispersal area of P. nitens has been subjected to a change in land use. The agricultural frontier expanded at the expense of native forest, with the incorporation of production systems that use high doses of the herbicide glyphosate. As a consequence of this process, soil contamination and loss of biodiversity have been reported, mainly in the Yungas and Gran Chaco regions (Choumert & Phélinas, 2015). On the other hand, the herbicide applied on crops can reach nontarget species of the surrounding vegetation, a phenomenon known as drift (Gomes et al., 2014a).

Although the mechanism of action of glyphosate is well known, the physiological responses to the herbicide in forest species have been poorly studied. These include inhibition of the photochemical and biochemical stages of photosynthesis, oxidative stress due to accumulation of reactive oxygen species, damage to cell membranes, and alteration in ionic homeostasis (Gomes et al., 2014b).

Herbicide application: Plants were sprayed with Roundup® Full II (Monsanto Argentina) containing 65% (w/w) of glyphosate potassium salt (N-phosphonomethyl glycine) as the active ingredient in doses of 0, 65 or 130g a.e. ha-1. The herbicide application was carried out according to the conditions described by Meloni & Martínez (2021). Twenty days after herbicide application, leaf samples were taken for chemical determinations.

Determination of concentrations of shikimate: Shikimate was determined according to the method described by Singh & Shaner (1998). One hundred milligrams of leaves were homogenized in 30ml 0,25N HCl. The extract was centrifuged at 25 000g for 15min. A 40µl aliquot of the supernatant was collected to add 0,5ml of periodic acid 1%. After 3h, 0,5mL NaOH 1N and 0,3ml glycine 0,1% were incorporated. The solution was vigorously mixed, and the absorbance was measured at 380nm in a spectrophotometer. Results were expressed in mg g-1 DW.

Quantification of photosynthetic pigments: Leaf samples (0,2g) were ground in a mortar with 80% acetone (v/v); the extract was filtered through glass wool and centrifuged at 15 000 x g for 5min. Supernatant was collected, and absorbances were measured at 663, 647, and 470nm. Concentrations of chlorophyll a, chlorophyll b, and carotenoids were calculated according to Lichtenthaler & Wellburn (1983) equations. Results were expressed in mg g-1 DW.

Determination of mineral composition: Leaves were dried in forced ventilation oven at 60oC to constant weight. They were then ground in a Wiley-type mill, sieved, and digested with 2N HCl. Mineral composition was quantified by inductively coupled plasma atomic emission spectrometry (ICP-AES; PSFO 2.0, Leeman Labs INC., USA), according to the technique described by Chrysargyris et al. (2017). 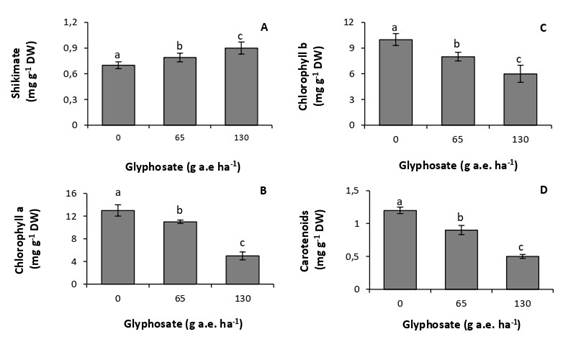 Fig. 1. Concentration of shikimate (A), chlorophyll a (B), chlorophyll b (C), and carotenoids (D) in P. nitens seedlings treated with increasing doses of glyphosate. Values represent the means ± SD of four replicates; when labelled with different letters, they are significantly different (Tukey test; P < 0,05).

Glyphosate affected leaf mineral composition. Concentrations of potassium and magnesium were not affected by the dose of 65g a.e ha-1 (Fig. 2 A, B). In contrast, the dose of 130g a.e. ha-1 produced a 13% and 12,5% reduction in concentrations of potassium and magnesium, respectively. Calcium was the macronutrient most affected by the herbicide, with decreases of 19% and 25% in the treatments of 65 and 130g a.e. ha-1, respectively, with respect to the control (Fig. 2C).

The accumulation of micronutrients was more sensitive to the herbicide than that of macronutrients, decreasing at the two doses tested (Fig. 2D, E, F). The response was proportional to the glyphosate dose. At the dose of 130g a.e. ha-1, concentrations of zinc, manganese, and iron experienced a reduction of 25%, 37,5% and 27%, respectively, with respect to the control. 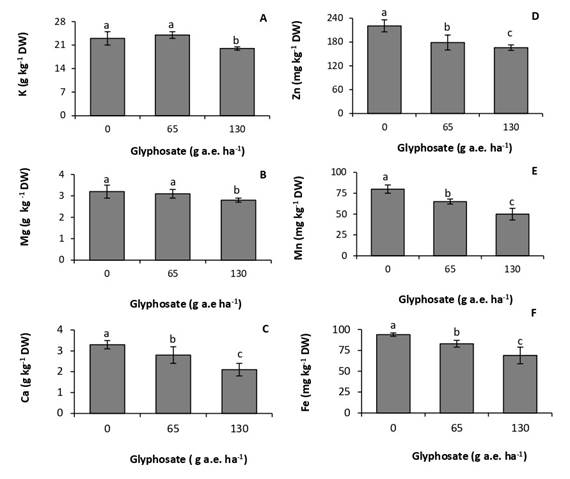 At the doses studied, glyphosate affected the physiology and biochemistry of P. nitens. The accumulation of shikimic acid in P. nitens leaves (Fig. 1A) shows that glyphosate inhibited the activity of the enzyme 5-enolpyruvyl-chiquimate-3-phosphate synthase (Schrübber et al., 2014). This result further indicates that the herbicide succeeded in overcoming the leaf epidermal barriers, reaching the interior of the leaves. It also indicates a high sensitivity of the species, since doses as low as 65g a.e ha-1 produced a significant inhibition in enzyme activity.

All glyphosate doses tested produced a decrease in concentrations of photosynthetic pigments (Fig. 1B, C, D). These results coincide with those observed in Zeyheria tuberculosa, a pioneer species native to Brazil, sensitive to glyphosate (de Freitas-Silva et al., 2021). However, in this species the decrease in the concentration of chlorophyll a was observed from a dose of 360g a.e. ha-1, whereas in P. nitens it was observed from a dose of 65g a.e. ha-1. This result shows the high sensitivity of the species to the herbicide. The decrease in concentrations of chlorophyll in plants treated with glyphosate may be due to inhibition in their synthesis or an increase in the rate of degradation (Huang et al., 2012; Gomes & Juneau, 2016). Glyphosate has also been reported to cause damage to chloroplast membranes. This damage includes the loss of proteins associated with the antenna complex of photosystems and, because of it, a decrease in the concentration of pigments (Gomes et al., 2017). It has also been attributed to chloroplast degradation, with concomitant loss of the photosynthetic apparatus (Mateos-Naranjo & Pérez-Martin, 2013).

Decreased concentrations of carotenoids have also been reported in plants of Eugenia uniflora, a native species of the Brazilian Atlantic rainforest (de Freitas-Silva et al., 2021). This response has been attributed to the inhibition of enzymes involved in their synthesis (Sandmann et al., 2006). Carotenoids act as accessory pigments in photosynthesis and as protectors against oxidative stress. This result indicates that glyphosate compromises light absorption and the photochemical stage of photosynthesis. It also shows an increased susceptibility of leaf tissues to the action of reactive oxygen species, which are usually produced under abiotic stress conditions (Meloni & Martinez, 2021).

Glyphosate reduced concentrations of macro- and micronutrients in P. nitens leaves (Fig. 2A, B, C, D, F). Glyphosate inhibits the absorption and transport of cationic macro- and micronutrients due to the formation of poorly soluble glyphosate-metal complexes in plant tissues (Mertens et al., 2018). In agreement with this result, glyphosate reduced concentrations of macro- and micronutrients in two soybean cultivars. The effect was more marked when the herbicide application was made at early stages of the crop (Zobiole et al., 2011). These authors correlated this behavior with the reduction in the concentration of photosynthetic pigments, which in turn was proportional to the photosynthetic rate. Glyphosate can interfere with chlorophyll synthesis by inhibiting magnesium absorption, and the formation of the precursor d-aminolevulinic acid, which requires iron (Gomes et al., 2014b). Metabolic processes taking place in chloroplast are also very sensitive to deficiencies of manganese and zinc (Nilson, 1985).

Biomonitoring consists of the use of species sensitive to pollutants to monitor soil, water, and air quality (Batista et al., 2018). This technique has been proposed as an alternative to evaluate the effect of herbicides in forest ecosystems (Rezende-Silva et al., 2019). For this purpose, variables of photosynthesis (florescence and gas exchange), shikimate accumulation, antioxidants, and malondialdehyde, among others, have been used as biomarkers (Schrübbers et al., 2014; de Freitas-Silva et al., 2020). The high sensitivity of P. nitens to glyphosate suggests the use of this species for this purpose. On the other hand, all the physiological variables studied were sensitive to the herbicide, and thus could be used in biomonitoring works in the region. Among all of them, the response of photosynthetic pigments is of particular interest, since its determination is carried out through simple and low-cost techniques. There are also nondestructive techniques for estimating the concentration of photosynthetic pigments, which are already used for biomonitoring in other regions (de Freitas-Silva et al., 2021).

It is concluded that glyphosate alters the photochemical stage of photosynthesis by decreasing the concentration of photosynthetic pigments. It also interferes with the homeostasis of macro- and micronutrients.

The authors declare that they have fully complied with all pertinent ethical and legal requirements, both during the study and in the production of the manuscript; that there are no conflicts of interest of any kind; that all financial sources are fully and clearly stated in the Acknowledgments section; and that they fully agree with the final edited version of the article. A signed document has been filed in the journal archives.