Myrtaceae (the myrtle family) is the ninth largest flowering plant family on Earth with about 132 genera and ca. 5 950 species with a wide distribution in tropical and subtropical climates of the world, mainly concentrated in the Southern Hemisphere, largely composed of small trees and shrubby species (Christenhusz & Byng, 2016; Govaerts et al., 2008). This family of plants has important economic value. Some species of the genus Eucalyptus produce a hardwood timber that is used for electrical transmission poles to make temporary construction and it is used in pulp and paper industries. Several species are important in horticulture as ornamentals and as a source of medicinally important essential oils containing cineole (eucalyptol) or citral (geranial + neral) used as expectorants and to relieve a cough. Melaleuca alternifolia Cheel is notable for its anti-fungal and antibiotic oil (tea tree oil) used safely in multiple topical products. Of great importance is the clove oil from the dried flower buds of Syzygium aromaticum (L.) Merr. & L. M. Perry (valuable as commercial spice) and Pimenta racemosa (Mill.) J. W. Moore (bay oil) which is used by the perfume industry. Although this family is not an important source of food, edible fruits are produced by species of some genera: Psidium guajava L. (guava), P. friedrichsthalianum (O. Berg) Nied. (cas), Acca sellowiana (O. Berg) Burret (feijoa), Eugenia uniflora L. (pitanga), and Syzygium spp. (roseapples). These fruits are eaten raw or cooked and are used for making beverages, jellies, jams, and preserves.

Melaleuca L. is a genus of shrubs and trees included in the tribe Melaleuceae, composed by 290 species with 37 infraspecific taxa (Brophy, Craven & Doran, 2013), with the majority of species endemic to Australia and a few occurring in Malaysia, Indonesia, New Guinea, the Solomon Islands, and New Caledonia. The evergreen tree Melaleuca quinquenervia (Cav.) S. T. Blake, commonly called “niaouli” (New Caledonia) and “paperbark tea tree” (because the whitish outer bark peels into thin layers) with simple grayish green alternate leaves, is native from Queensland, New South Wales, Indonesia, Papua New Guinea and is widespread in New Caledonia. When the leaves are crushed, they give off a scent with a camphoraceous aroma. The spicate inflorescences are white or creamy-white shaped like bottle brushes. The fruits are woody, small cylindrical capsules, borne in clusters on twigs.

The chemical composition of leaf essential oil from these species has been the subject of several studies (Aboutabl, Tohamy, De Poter, & De Buyck, 1991; Ramanoelina, Bianchini, Andriantsiferana, Viano, & Gaydou, 1992; Ramanoelina, Viano, Bianchini, & Gaydou, 1994; Moudachirou et al., 1996; Philippe, Goeb, Suvarnalatha, Sankar, & Suresh, 2002; Ireland, Hibbert, Goldsack, Doran, & Brophy, 2002; Trilles et al., 2006; Wheeler, Pratt, Giblin-Davis, & Ordung, 2007; Silva, Barbosa, Maltha, Pinheiro, & Ismail, 2007; Gbenou, Moudachirou, Chalchat, & Figuérédo, 2007; Morales-Rico, Marrero-Delange, González-Canavaciolo, Quintana-Ramos, & González-Camejo, 2012; Morales-Rico et al., 2015; Siddique, Mazhar, Firdaus-E-Bareen, & Parveen, 2018; Acha et al., 2019; Diallo et al., 2020). The niaouli essential oil has been produced since the last decade of the 17th century in the northern region of New Caledonia, and at present it is produced commercially in Madagascar. The oil is used in aromatherapy, as antiseptic and expectorant for respiratory ailments, and in pharmaceutical preparations to the relief of coughs and colds. It is indicated mainly for rhinitis, sinusitis and bronchitis (Vanaclocha & Cañigueral, 2003). In Costa Rica, the leaf infusion is taken as a sudorific, antispasmodic and pulmonary antiseptic (Morton, 1981). To the best of our knowledge, the chemical composition of the oils of M. quinquenervia cultivated as ornamental in Costa Rica has not been described previously.

Isolation of the essential oils: Oils were obtained by hydrodistillation at atmospheric pressure, for three hours using a Clevenger-type apparatus. The distilled oils were collected and dried over anhydrous sodium sulfate, filtered and stored between 0°C and 10°C in the dark, until further analysis. The essential oil yields (v/w) from diverse morphological parts were: 1,20 % (leaf), 0,33 % (fruit), and 0,06 % (twig).

Compound identification: Identification of the oil components were performed using the retention indices which were calculated in relation to a homologous series of n-alkanes, on a 5% phenyl-/95% dimethylpolysiloxane type column (van Den Dool & Kratz, 1963), and by comparison of their mass spectra with those published in the literature (Stenhagen, Abrahamsson, & MacLafferty, 1974; Swigar & Silverstein, 1981; Adams, 2007) and those of our own database, or comparing their mass spectra with those available in the computerized databases (NIST107 and Wiley139) or in a web source (Wallace, 2019). To obtain the retention indices for each peak, 0,1μL of n-alkane mixture (Sigma, C8-C32 standard mixture) was injected under the same experimental conditions reported above. Integration of the total chromatogram (GC-FID) expressed as area percent without correction factors, has been used to obtain quantitative compositional data.

Chemical composition of the essential oils from Melaleuca quinquenervia cultivated in Costa Rica.

The essential oil of M. quinquenervia is principally produced in the leaves (1,20%), while in the fruits, the amount is about three times less (0,33%), and the yield of the twigs is very low (0,06 %). The oils are composed primarily by terpenoids. The main components of the leaf oil were cyclic monoterpenoids (66,4%) and sesquiterpenoids (28,3%). In the oil of the fruits, the proportions of both types of terpenoids are reversed with respect to that of the leaf oil: 30,4% and 62,1% respectively. The twig oil contained large amounts of sesquiterpenoids (>90%) with a high percentage of viridiflorol (66,0%). 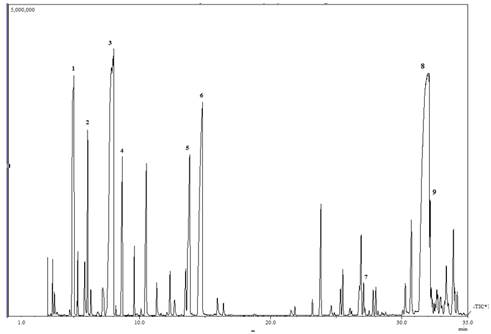 The essential oil from leaves of M. quinquenervia collected near Toamasina, Madagascar, revealed the presence of four chemotypes (Ramanoelina et al., 1994). Moudachirou et al. (1996) described three “chemovarieties” from Benin. Trilles, Bouraïma-Madjebi and Valet (1999) revealed the existence of five chemotypes in New Caledonia. Ireland et al. (2002) studied the chemical variation in the leaf oil over the geographical range of Australia and Papua New Guinea, reporting two major chemotypes. Trilles et al. (2006) classified the niaouli oils from New Caledonia into three chemotypes, using principal component analysis. Wheeler (2006) reported the existence of two chemotypes in Florida. Gbenou et al. (2007) reported the presence of three chemotypes in Benin. Despite the fact that there are reported about six chemotypes of this species, according to the criteria of Brophy et al. (2013), there are two distinct chemotypes of M. quinquenervia; chemotype I produce leaf oils rich in (E)-nerolidol (in amounts up to 95%) and chemotype II give rice to oils rich in 1,8-cineole (and/or) viridiflorol as well as lesser amounts of other terpenes and terpenoids.

The leaf oil produced from M. quinquenervia cultivated in Costa Rica contained as major constituents 1,8-cineole (1) (31,5%) (see numbered chemical structures in Fig. 2) and viridiflorol (2) (21,7%), as well as lesser amounts of α-pinene (17,9%), α-terpineol (6,5%), terpinen-4-ol (2,6%), γ-terpinene (2,3%), β-pinene (1,9%), ledol (1,3%), β-caryophyllene (0,9%), and caryophyllene oxide (0,8%), corresponding to chemotype II, with a natural occurrence in Queensland, New South Wales from Cape York Peninsula southwards along the coastal and subcoastal regions to the Sydney district, Australia. Also occurs in southern Papua province, Indonesia (characterized also by the presence of globulol) and is widespread in New Caledonia. Typically, chemotype II contains the cyclic terpenoids 1,8-cineole (10-75%), viridiflorol (13-66%), α-terpineol (0,5-14%), and β-caryophyllene (0,5-28%) (Ireland et al., 2002). According to Padovan, Keszei, Köllner, Degenhardt, and Foley (2010), the viridiflorol biosynthesis occurs by the catalytic action of terpene synthase enzymes, and the genes coding for these enzymes are present in the genome of the species, regardless of the chemotype, but are expressed only in the viridiflorol chemotype. The acyclic (E)-nerolidol (3) (see Fig. 2) is the main terpenoid in the chemotype I leaf oil and was undetectable in the Costa Rican essential oil samples.

Qualitative and quantitative differences of the leaf, fruit and twig essential oil compositions were observed. A considerable increase in the proportion of viridiflorol is noted according to the morphological part from which the oil is obtained. Thus, the amount of viridiflorol in the leaves (21,7%) is lower and increases in the oils of the fruits (42,1%) and twigs (66,0%). On the other hand, the proportion of 1,8-cineole varies inversely from leaves (31,5%) to fruits (3,4%), and twigs (0,7%).

The experimental fact that foliar essential oil of M. quinquenervia growing in Costa Rica produces as major constituents 1,8-cineole (31,5%) and viridiflorol (21,7%), it seems to indicate that the plants introduced in Costa Rica belong to chemotype II, as defined by Ireland et al. (2002) and Brophy et al. (2013), and it could suggest that the original plants were brought from Australia (coming from southern Queensland or northern New South Wales) or New Caledonia.

The authors declare that they have fully complied with all pertinent ethical and legal requirements, both during the study and in the production of the manuscript; that there are no conflicts of interest of any kind; that all financial sources are fully and clearly stated in the acknowledgements section; and that they fully agree with the final edited version of the article. A signed document has been filed in the journal archives.

The declaration of the contribution of each author to the manuscript is as follows: