Food presence is one of the main factors that determine land snail distribution (Puslednik, 2002); however, despite their importance for conservation management, very little is known about the feeding preferences, biology, and habitat of Neotropical land mollusks.

Most papers dealing with snail food preferences refer to plant palatability and feeding preferences, especially if they are pests (Andrews, Valverde, & Ramírez, 1985; Thakur, 1998; Peters, Baur, Bazzaz, & Körner, 2000; Speiser, 2001; Puslednik, 2002; Dourson, 2008; Meyer et al., 2014). However, many species do not eat plants. Many tropical native tree snails feed on corticolous lichens (Reyes-Tur, González-Guillén, Rosabal, & Capote-Danet, 2020) or on epiphytic flora, including epiphylls. Species of genus Orthalicus feed on epiphytic algae growing on trunks and leaves (Craig, 1972). In Hawaii, arboreal snails are believed to graze on epiphytic fungi growing on the underside of leaves (Meyer et al., 2014). In Costa Rica, T. costarricanus has been reported grazing on epiphylls (Barrientos, 2020a). Even the Japanese arboreal snail Euhadra brandtii sapporo grazes on epiphytic lichens and mosses (Saeki et al., 2017).  Epiphylls are common in tropical forests, however, little is known about general characteristics like epiphyll and trichome cover, leaf density, size, shape among other anatomical and chemical characteristics, and about interactions between epiphylls, leaves and other species that share this microhabitat, including snails (Wäreborn, 1970; Coley, Kursar, & Machado, 1993; Coley & Kursar, 1996; Lücking & Bernecker-Lücking, 2000; Meyer et al., 2014).

The semislug Tikoconus costarricanus inhabits understory shrubs in Costa Rican humid and well-preserved understories (Barrientos, 2019). Relative humidity, temperature, rain, canopy drip from fog, dew and rain are determinant factors in activity peaks, leaf side selection according to daytime, and vertical distribution (Barrientos, 2020a, 2020b). However, substrate preferences, feeding time and daily displacement are unknown. In this paper I analyzed T. costarricanus’ feeding habitat and behavior.

I conducted this study in the Reserva Forestal Río Macho in a tropical montane wet forest (Costa Rica) (9o45'56.07"N, 83 o51'47.11"W, 1 640 masl). I searched for specimens of T. costarricanus on a 2km long, fixed trail, during seven 24-hour periods in May 2010 - March 2011. I sampled every 3-4 hours; each sampling took one to two hours. During the first sampling of each day, I searched for snails on shrubs at both sides of the trail. When I found a snail, I made sure that no more snails were on that particular plant. I placed a conspicuous mark on the trail: this allowed me to find the place during night surveys. I also marked the shrub with red flagging and an individual number. I attached a small red ribbon to the stem with the snail and drew a small dot with white indelible ink besides the snail; after the first survey, I erased the previous dot.

On each occasion I observed the snails for less than 15 seconds and I took note of the snail´s location in the forest and in the part of the plant in which they were located (underside or upper side of leaves or twigs). I also took note of leaf type (monocotyledon, dicotyledon or fern); daytime and season; if they were feeding or not and number of droppings; visible epiphyll cover of the leaf with the snail (my personal visual estimate in four categories: very low, 0-25%; low, 26-50%; medium, 51%-75%; and high, 76- 100%), to determine percentages I divided each leaf in four quadrants, 25% each; trichome cover: none for glabrous leaves, low when trichome density was 5 or less trichomes per cm2 or high if there were more than 5 trichomes per cm2; I also noted if the snail was moving or not; any snail displacement, and if they snail had moved to a different leaf. When possible, I followed the snail mucous trail and measured displacement considering the white dot that I had drawn in the previous survey, otherwise, and based on my personal experience from watching dozens of these snails moving on leaves, I recorded the simplest and shortest trail that the snail could have followed.

I excluded specimens on twigs from epiphyll, leaf type and trichome preferences and from feeding and defecation time analyses. I calculated total displacement in 24-hour periods by adding all the displacements recorded for each specimen within the period. I calculated time spent on each leaf by adding the time between each sampling whenever I found the snail in the same leaf. As several hours passed between samplings, time spent on each leaf and displacement results represent the minimum quantity. For a detailed methodology see Barrientos (2020b).

To prevent the bias that could result from only measuring characteristics in leaves occupied by snails, I also sampled epiphyll cover, leaf trichome cover and leaf type occurrence in the understory in general. I used this information as a base line or reference to compare with the leaves that did have snails. For this reference, I used a random generator to select 20 numbers between 0 and 60. These numbers corresponded to the minutes in one hour walk (about 3km/hour) when I stopped to take photos and leaf samples. The side of the trail (left or right) in which I worked was also randomly selected in advance. I photographed each collecting place with a Sony camera (DSLR-A350; 14,2 megapixels) with an 18-70mm macro lens located 160cm above the ground. Afterwards, two assistants collected leaves between 0 and 200cm above ground for 30 seconds, for epiphyll and trichome cover analysis. I analysed these variables only once in the study period, since wet tropical montane plants remain alive and with the same foliage throughout the year, so no significant seasonal change was expected.

In the laboratory, I used a standardized grid with 345 evenly distributed dots digitally overlaid on each photograph to establish the reference percentage of monocotyledon, dicotyledon and fern leaves in the wild. For this purpose, I counted the number of dots falling over monocotyledon, dicotyledon and fern leaves in the sampling site photographs. I did not count dots above trunks, soil, dead leaves, sky, unidentifiable leaves, or twigs. I also classified each collected leaf in the corresponding epiphyll and trichome cover category. 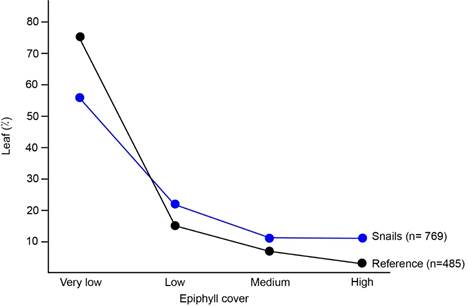 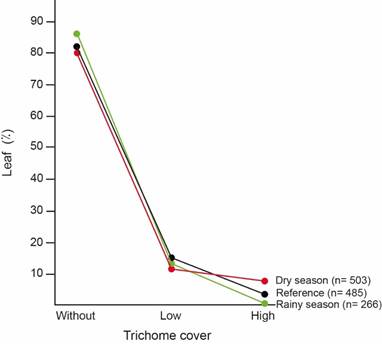 Epiphylls are the main food of T. costarricanus —and probably of other shrub euconulids— explaining why they prefer leaves with more epiphylls despite their scarcity in the forest (Monge-Nájera, 1989; Coley et al., 1993; Monge-Nájera & Blanco, 1995; Lücking & Bernecker-Lücking, 2000). Epiphylls also provide camouflage (Barrientos, 2019) and probably moisture (Wiesenborn, 2003; Barrientos, 2019). Lücking & Bernecker-Lücking (2000) found that land mollusks (an euconulid as I can identify from the figure) feed more often on lichens with high content of calcium oxalate crystals. Terrestrial gastropods can also be very specific in the kind of lichen they eat: if they have the opportunity, they prefer lichens that allow juveniles to gain more weight (Baur, Baur, & Fröberg, 1994).

Many season-independent activities are determined by environmental conditions that are stable along the year. In the studied forest, leaf litter humidity is high and stable all year around, creating a very humid and stable understory environment (Barrientos, 2012; Aparecido et al., 2018). Under these circumstances, leaves seldom fall and epiphylls grow constantly, therefore it is not a surprise that T. costarricanus´ epiphyll cover selection, time spent on each leaf, and leaves visited, have no seasonal differences. Displacement is also similar in both seasons, maybe because food search is the main reason for land mollusk displacement (Cook, 2001; Speiser, 2001); in other words, if food is constant regardless of the season, no extra displacement is needed. Time spent on each leaf, and number of leaves visited, need more research, I presume that they are related with epiphyll cover and leaf size and shape.

On the contrary, it is quite unexpected that the preferred leaf type changes with seasons. Many researchers found that land snails tend to be on the most abundant plants (Chatfield, 1976; Williamson & Cameron, 1976; Szlávecz, 1986; Speiser & Rowell-Rahier, 1991; Hatziioannou, Eleutheriadis, & Lazaridou-Dimitriadou, 1994; Iglesias & Castillejo, 1999). In the case of T. costarricanus, most snails were on dicotiledonean leaves, which were the more abundant leaf type in the understory. However, there was a tendency to avoid ferns and to select monocotiledonean leaves, especially during the rainy season. Possible explanations can be divided into chemical and morphological causes. Future work should test if fern, or monocotiledonean secondary metabolites or stemflow, affect epiphyll growth -the snail´s main food source- or calcium availability (Wink, 1988; Vetter, 2018; Ohta & Saeki, 2020). Among the morphological reasons, fern pinnae and pinnule epidermis and shape may encumber snail displacement (Gorb, 2008) or they may favor canopy drip, exposing snails to be washed away from leaves (Dean & Smith, 1978; Monge-Nájera & Blanco, 1995; Gorb, 2008; Meyer et al., 2014; Barrientos 2020b). On the contrary, monocotyledonous leaves may offer more protection against environmental factors.

Snails were more often found on leaves without trichomes, not only because such leaves are the most common, but probably also because trichomes may have phytotoxin oils or secondary metabolites that suppress epiphyll establishment or react to their slime and crawling (Wagner, 1991; Nonomura et al., 2009). However, seasonal differences on leaves with high trichome cover suggest structural interactions. During the dry season leaves with many trichomes better reflect visible light and infrared radiation, and this may help snails regulate their temperature during the day (Bickford, 2016). At the same time, trichomes may prevent heat loss by creating an air layer during the dry season nights (Westerbergh & Nyberg, 1995).

The mean daily distance that land snail travel depends on food availability but also on snail size (Baur & Baur, 1988; Cook, 2001). Snails of the genus Xeropicta are similar in size to T. costarricanus but live in a subtropical region. The maximum distance Xeropicta travel in a day is similar to what T. costarricanus travels, but on average, each day, Xeropicta travels twice the distance (Popov & Kramarenko, 2004). Food abundance in tropical montane regions explains why T. costarricanus needs to travel less, but physiological limitations explain why similar-sized species share the same maximum distance traveled in a day.

It is not known if land snails produce feces continuously, accumulate and release them periodically or if they are produced and released immediately (Dimitriadis, 2001). It is also not known if defecating is a risky activity, for example preventing them from defensive shell rotation or foot twisting (Barrientos, 2020a). Therefore, it is better to do it under the protection of the leaf. Daily endogenous cycles have been described for Deroceras panormitanum (Dimitriadis, 2001); it is possible that also T. costarricanus and Polymita muscarum have endogenous cycles that explain why they defecate around 4:00am, regardless of the season (Reyes-Tur, Flores-Ricardo & Fernández-Velázquez, 2018).

Neotropical arboreal and shrub snail behavior and ecological requirements are still poorly understood. Understory composition and structure are relevant in the conservation of the feeding habitat of T. costarricanus.

The author declares that she has fully complied with all pertinent ethical and legal requirements, both during the study and in the production of the manuscript; that there are no conflicts of interest of any kind; that all financial sources are fully and clearly stated in the acknowledgements section; and that she fully agrees with the final edited version of the article. A signed document has been filed in the journal archives.

The statement of each author’s contribution to the manuscript is as follows: Z.B.: is the sole author.

Craig, A. K. (1972). Observations on the arboreal snail Orthalicus floridensis. Quarterly Journal of the Florida Academy of Sciences, 35(1), 15-20.