The Cyprinodontiformes are a diverse group of teleost fishes distributed in temperate, subtropical and tropical, areas of the world; they are common in freshwater systems, but they also occur in brackish and marine waters (Parenti, 1981; Nelson, Grande, & Wilson, 2016). In Asia the Cyprinodontiformes are in Madagascar, Seychelles, India, Sri Lanka, the Indo-Malaysian archipelago, and Java; in Africa around the Mediterranean Sea and from south of the Sahara Desert to South Africa and Madagascar; in Europe, Cyprinodontiformes occur mainly around the Mediterranean Sea, southeastern Spain, Italy, western Greece, and Turkey. In America from southeastern Canada south to Argentina, including the West Indies archipelago (Nelson et al., 2016). These fishes are commonly known as killifishes, topminnows, four-eyed fishes, or toothcarps (Parenti, 1981; Nelson et al., 2004) and are represented by ~2,000 valid species, distributed in 14 families (Fricke, Eschmeyer, & van der Laan, 2020). Cyprinodontiformes are secondary freshwater fishes, and some members can tolerate waters with elevated salinity levels, occasionally using coastal and marine waters for dispersal (Miller, 1966).

In El Salvador, the Cyprinodontiformes represents 10% of the freshwater fish diversity (McMahan et al., 2013), and in some watersheds, such as the Acahuapa River, members of this order reach 26% of the total species richness, and 77% of the abundances of the fish assemblage (Álvarez et al., 2017). This highlights the importance of Cyprinodontiforms in Salvadorian freshwater systems. However, the absence of accurate taxonomic keys for the identification of species in El Salvador has generated identification errors and confusion regarding the delimitation of species. Moreover, in recent years important changes in the taxonomy of the group have occurred, as well as new advances in terms of the knowledge about their distributions. Thus, our objectives were a) to present updated taxonomic information on cyprinodontiform fishes from El Salvador, including their geographical distribution and habitat use, and b) to provide a photographic taxonomic key to facilitate their identification.

Records of Cyprinodontiformes of the El Salvador by drainage. 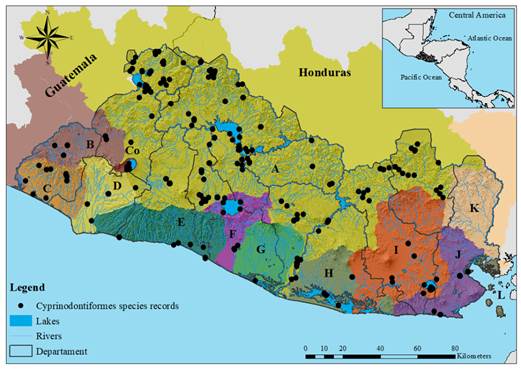 Profundulus guatemalensis (Günther, 1866); “Guatemalan killifish”, “Escamudo guatemalteco”, “Olomina” (Figure 2A). Remarks: Profundulus guatemalensis has been considered a valid species since its original description by Günther (1866). Currently supported at the molecular level, the distribution of P. guatemalensis is restricted to the Pacific Slope of Guatemala and El Salvador (Morcillo et al., 2016) (Fig. 1 in Digital Appendix).

Profundulus kreiseri Matamoros, Schaefer, Hernández, & Chakrabarty 2012; Olomina, Escamudo de Kreiser, Kreiser’s killifish (Figure 2B). Remarks: Profundulus kreiseri was originally described based on material from the Ulúa and Chamelecón Rivers in Honduras (Matamoros, Schaefer et al., 2012). It has been reported in the Atlantic slope in Guatemala and the Pacific slope in El Salvador (McMahan et al., 2013; Morcillo et al., 2016). Its distribution in El Salvador is limited to the north region of El Salvador, in tributaries of the Río Lempa basin (Fig. 1 in Digital Appendix).

Family Poeciliidae: This family is comprised of 274 species, of which ten have been described in the last decade from Middle America (Fricke et al., 2020). The family Poeciliidae is distributed from the South of the  United States to the North East of Argentina (Miller et al., 2009), and its greatest diversification occurred in Central America (Rosen & Bailey, 1963; Miller, 1966). Biogeographic studies place the origin of this family in Central and South America (Reznick et al., 2017; Tagliacollo, Duke-Sylvester, Matamoros, Chakrabarty, & Albert, 2017), however, the estimated dates of origin are still debated. In El Salvador three genera are present; Poeciliopsis Regan, 1913, Poecilia Bloch & Schneider, 1801, and Pseudoxiphophorus Bleeker, 1860, with two, five, and one species respectively (McMahan et al., 2013). In general, the species of this family in El Salvador inhabit small rivers, streams, lakes, and lagoons, from clear to disturbed water, rivers and streams with little surrounding vegetation, characterized by substrate mainly composed of rocks, logs, silt, leaves, and sand, shallow waters, and moderate to low currents.

Family Anablepidae: This family is represented by a total of 19 species distributed in the Neotropics from Mexico to South America (Fricke et al., 2020). The origin of the family is still debated, with some studies suggesting that the clade originated in the Lower Cretaceous (130-110 Ma), before Africa and South America split (Rosen, 1975; Ghedotti, 2000; Hrbek et al., 2007) or between the Upper Cretaceous and the Early Palaeocene (62-67 Ma) (Reznick et al., 2017). Recent molecular studies suggest that Anablepidae originated in South America during the Oligocene (~29.6 Ma) (Amorim & Costa, 2018), followed by a separation between the oviparous brackish and marine genus Oxyzygonectes Fowler 1916 and the clade comprised by the viviparous anablepids including the brackish and marine genus Anableps Scopoli 1777 and the predominantly freshwater genus Jenynsia Günther 1866 (27.9 Ma), which eventually diverged from each other in the Miocene (12.5 Ma).

Anableps dowii Gill, 1861; “Pacific four-eyed fish”, “Cuatro Ojos” (Figure 2K). Remarks: The holotype of this species was collected in the Bay of La Unión, El Salvador (Gill, 1861). Its distribution range includes Mexico, Guatemala, El Salvador, Honduras, and Nicaragua. It occurs in freshwater, brackish, and marine environments. In El Salvador, A. dowii occurs in many watersheds at an elevation ranging from 0 to 960 masl (Fig. 6 in Digital Appendix). Anableps dowii inhabits coastal lagoons, estuaries, rivers with moderate to low currents. It is usually found in deep waters and wide rivers, substrates mainly composed of sand, silt, and rocks, in open environments with little surrounding vegetation, it is common to observe it on the surface of the rivers.

Key to the Salvadoran species of the Order Cyprinodontiformes:

3b. Oval milky spots on the sides of the body absent or not conspicuous; the preorbital region with at least three to four conspicuous scales (not deeply embedded under the skin); scales in the caudal fin that covering only the anterior portion of the fin, not reaching their middle portion; caudal fin with 13-18 rays, pectoral fin with13-16 rays …………………………………………………………...…… P. kreiseri

10b. 16 scales around caudal peduncle; dorsal and caudal fins without black spots, both fins reddish to dark orange; a blotch at the caudal-fin base on scales of caudal-peduncle present……………………………………………….…………. P. marcellinoi 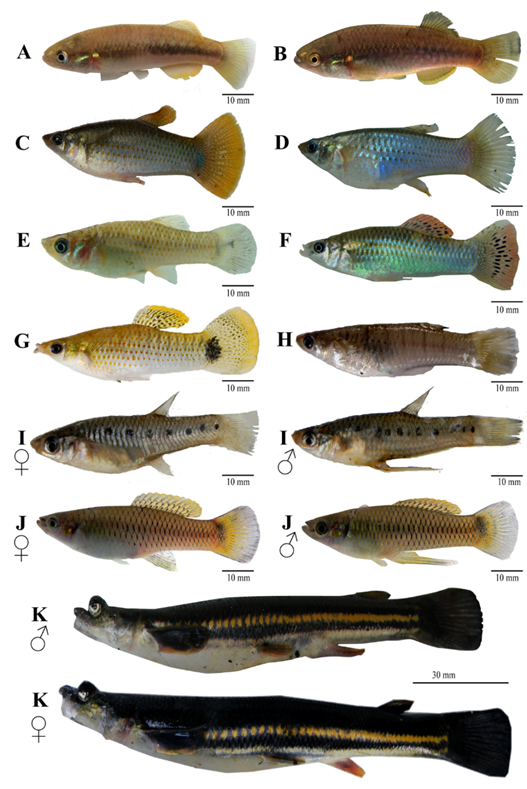 Members of the Cyprinodontiformes are among the most conspicuous fishes in Salvadorian rivers. Some species have very restricted ranges in the country, such as P. guatemalenis, P. kreiseri, and P. anzuetoi. For instance, P. kreiseri occurs in the north side of the country on the border with Honduras and Guatemala in the Río Lempa basin, while P. guatemalensis occurs in the northwest side of the country near the border with Guatemala in the Río Paz and Cara Sucia San Pedro basin. Both inhabit mountain rivers, whereas the distribution of P. anzuetoi appears to be restricted to the middle reaches of the Río Lempa basin, near to Cerrón Grande dam. The rest of the members of the Poeciliidae family and A. dowii are widely distributed in almost all the watersheds of El Salvador. The distribution of A. dowii in freshwater systems in El Salvador is unusual when compared to other countries where this species occurs close to the coasts (Miller et al., 2009; Robertson & Van Tassell, 2015), although there are records at 670 masl in Honduras (Miller, 1979), while in El Salvador this species is found at altitudes above 900 masl.

It is evident that this group is complex and diverse, and still genetic and morphological studies are necessary for clarifying the taxonomy of some species of this group (mainly of Poecilia genus) for the Mesoamerican region. This research compiled the most recent changes and relevant findings on the taxonomy, systematics, distribution, and habitat use of the Cyprinodontiformes in El Salvador. We recognize that there are still gaps in information and additional studies are necessary to improve our understanding of the freshwater fishes of the country. We hope that this document serves as a tool that facilitates the correct identification of the species both in the field and laboratory for future research.

The authors thank R. Alvarado Larios from the Museo de Historia Natural de El Salvador (MUHNES) for providing valuable information about the fish collection. We also appreciate the support of Leonel Méndez Gutiérrez in the production of maps. We are thankful to Michi Tobler for providing photographs (Poecilia sphenops) for the illustration of this document.

The authors declare that they have complied with all pertinent ethical and legal requirements, both during the study and in the production of the manuscript; that there are no conflicts of interest of any kind; that all financial sources are clearly stated in the acknowledgments section; and that they agree with the final edited version of the article. A signed document has been filed in the journal archives.

Gill, T. (1861). Description of a new species of the genus Anableps of Gronovius. Proceedings of the Academy of Natural Sciences of Philadelphia, 13, 3-6.

Hubbs, C. L. (1924). Studies of the fishes of the order Cyprinodontes. Miscellaneous Publications of the Museum of Zoology, University of Michigan, 16, 1-86. 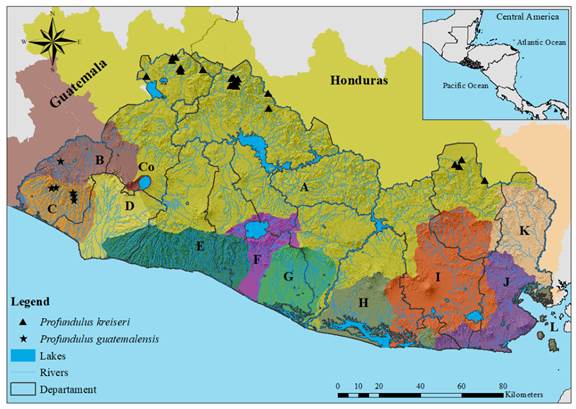 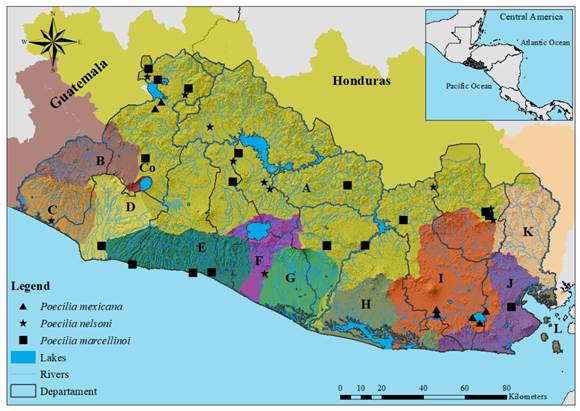 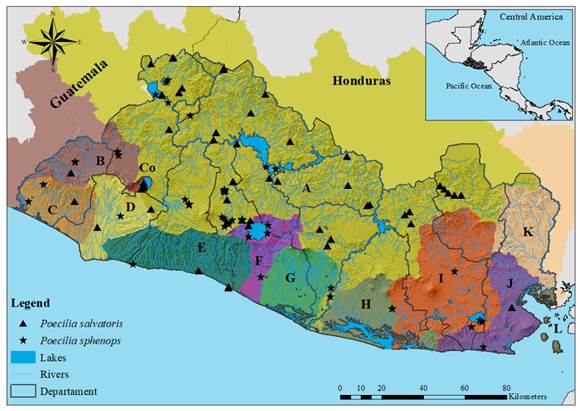 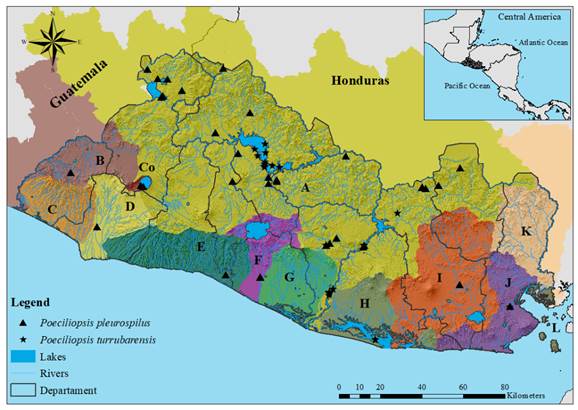 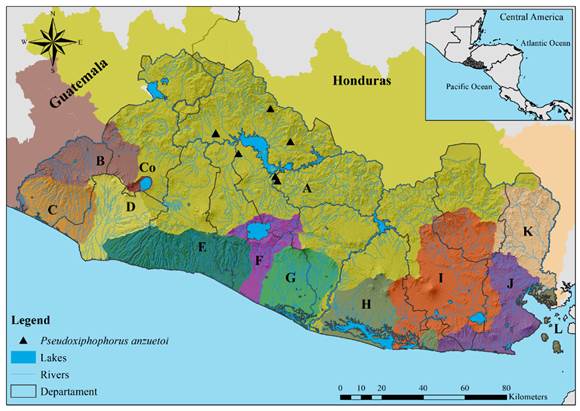 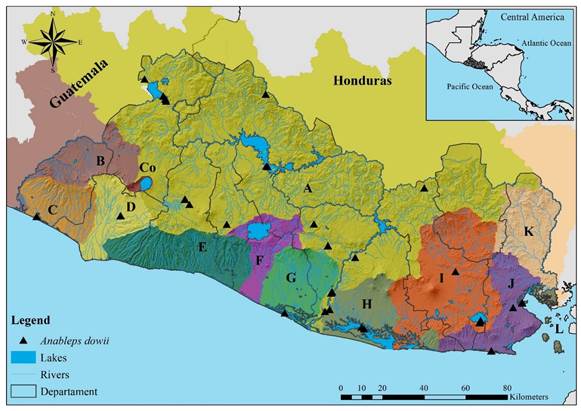