Live-bearing fishes of the family Poeciliidae (Garman, 1895) are a New World family with a widespread natural distributional range that includes South, Middle, North America, and the West Indies (Reznick et al., 2017). Poecilids are small fishes that are recognized by the presence in males of a gonopodium, which is an anal-fin transformed into an intromittent organ used for transferring sperm to the females (Jones et al., 2016). In Central America and southern Mexico, they are the most common and speciose fishes in freshwater systems (Matamoros et al., 2012; Matamoros et al., 2015). The family comprises 29 genera with ~ 275 valid species (Huber, 2019; Fricke et al., 2020), of which Poecilia (Bloch & Schneider, 1801) is the most specious genus (Huber, 2019; Fricke et al., 2020). Recent molecular phylogenies placed almost all Middle American Poecilia within the subgenus Mollienesia, (Garman, 1895) except for Poecilia caucana (Steindachner, 1880) that is placed in the subgenus Allopoecilia (Steindachner, 1880) (Ho et al., 2016). South American Poecilia such as P. reticulata (Peters, 1859), the species herein treated, was assigned to the subgenus Acanthophacelus (Günther, 1866) (Ho et al., 2016).

Poecilia reticulata is commonly known as guppy and it is one of the most popular aquarium fish in the world (Lucinda & Van Der Sleen, 2018). It is a small-bodied fish whose males reach up to 50mm in standard length whereas females can reach up to 60mm in standard length (Froese & Pauly, 2020). The species naturally occurs in coastal regions of Venezuela, Guyana and Trinidad and Tobago (Magurran, 2005; Deacon et al., 2011). However, due to intentional and nonintentional introductions, its popularity in the aquarium trade and its use for mosquito control (Warbanski et al., 2017), P. reticulata now has a global distribution and it is found in all continents except the Antarctica (Fig. 1) (Deacon et al., 2011; Lucinda & Van Der Sleen, 2018). 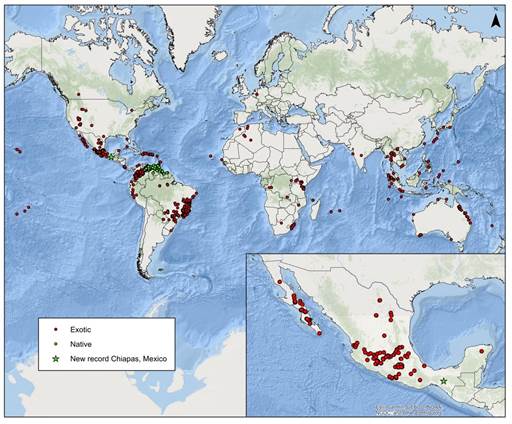 Poecilia reticulata is currently considered as a highly invasive species (Deacon et al., 2011), capable of modifying native fish communities and ecosystem processes (Fraser & Lamphere, 2013; Holitzki et al., 2013). Its invasive history suggests, that, once the species arrives at a new environment, life history and biological adaptations such as early reproductive maturity, sperm storage (Meffe & Snelson, 1989), superfetation (Courtenay & Meffe, 1989), and air-breathing capacity (Kramer & Mehegan, 1981; Boschetto et al., 2011), help the species to become well established and sometimes even dominant (Casatti et al., 2009). Although this species is not a top predator capable of directly predating upon native species, its capability of forming large populations may increase the likelihood of out-competing native fishes for food resources and changing rates of nutrient and/or organic-matter cycling, as it has been documented with other invasive species (e.g. Capps & Flecker, 2013a; 2013b).

In Mexico, P. reticulata was first introduced in 1971 for mosquito control purposes (Salgado-Maldonado & Rubio-Godoy, 2014). It was registered for the first time in Baja California, currently it is reported in streams in Baja California Norte, Baja California Sur and in the Gulf of Mexico (Comisión Nacional para el Conocimiento y Uso de la Biodiversidad [CONABIO], 2017). Although P. reticulata is considered a high-risk invasive species at the same level as tilapia (Oreochromis niloticus) (Linnaeus, 1758) (Golubov et al., 2014), the species is still commonly found in the Mexican aquarium trade and several rearing facilities that operate in the country (Devezé-Murillo et al., 2004). In the wild P. reticulata has been collected in at least 109 localities (González et al., 2014) and it has been documented that the river drainages of northwestern Mexico, the species has shown a rapid and successful expansion (Ruiz-Campos et al., 2014). In this paper, we report the occurrence of P. reticulata for the first time in a tributary of the Grijalva River in the state of Chiapas, southern Mexico.

The Grijalva River is located in southern Mexico and is part of the Grijalva-Usumacinta River Basin. On August 14th, 2019, and March 12th, 2020, fieldwork was performed in two localities in a small tributary of the Grijalva River near the city of Tuxtla Gutierrez, Chiapas, Mexico. In the two sampling points, we performed a pass with a backpack electro-shocker (DC backpack electrofishing SAMUS RICH P-2000) in a section of river of about 100 m, followed by a pass with a seine in the same river section. After capture, fish were euthanized with an overdose of tricaine methanesulfonate (MS-222), after that, they were placed in a solution of 10% formaldehyde and transported to the lab. At the laboratory, fish were counted and identified to species, and deposited in the fish collection of the Universidad de Ciencias y Artes de Chiapas.

The two sampled localities are small creeks of 5-7m width, with a water depth of 20-30cm, with riffles, pools and runs.  The substrate is dominated by mud, but there were also, rocks, gravel and sand.  There is riparian vegetation, but not submerged vegetation or emergent vegetation, canopy cover of 70-80%.

The presence of enlarged and swollen pelvic fins and a fleshy extension of the gonopodium place our specimens in the genus Poecilia (Fig. 2) (Froese & Pauly, 2020). In order to identify and to distinguished P. reticulata from other Poecilia we used a series of meristic and colouration characters as presented by Poeser et al. (2005): (1) polychromatic and polymorphic colouration pattern in males; (2) gonopodial palp extended beyond gonopodium tip; (3) absence of retrorse hook on tip of the gonopodial ray 3a; (4) presence of retrorse hook on tip of gonopodial ray 5; (5) gonopodial ray 3 with series of ventral serrae; (6) scales around caudal peduncle 14; and (7) females with 9 anal-fin rays and 6-7 dorsal fin rays. P. reticulata shows a conspicuous reticulate pattern along the females flank and lack of a humeral blotch are also useful characters to distinguish the P. reticulata from other Poecilia species (Bragança et al., 2020).

Records of P. reticulata in Mexico date back to 1971 (Salgado-Maldonado & Rubio-Godoy, 2014), however, recent checklist from the state of Chiapas did not report P. reticulata in freshwater systems (Gómez-González et al., 2015; Velázquez-Velázquez et al., 2016; Soria-Barreto et al., 2018). Herein we report the first record of P. reticulata in the Grijalva River Basin. The two localities registered in this study were probably the result of deliberate releases of ornamental fish. The introduction of exotic species is the second greatest threat to biodiversity, after habitat loss (Capdevila-Argüelles et al., 2013). This practice has occurred historically, but it is until recent times that this practice has exploded due to the promotion of trade and the lack of control of it. The mitigation and eradication of this practice, which would represent an instrument for the conservation of biodiversity. Therefore, it is essential to establish national strategies that integrate prevention, detection, rapid response, control and eradication of the release of invasive species (National Advisory Committee on Invasive Species, 2010.) One of the crucial activities is the monitoring and the capture of invasive species (Ramírez & Ramírez, 2017).

It has been reported that P. reticulata can has established ecologically competitive populations in some regions of the country (Ruiz-Campos et al., 2014). Although, that this species is a major threat to native-fish assemblages (Golubov et al., 2014). Poecilia reticulata has still been commercialized in the aquarium trade in Mexico, augmenting this way the possibility of further incrementing the distributional range of the species in Mexican territory. Poecilia reticulata was positively identified because of its conspicuous coloration that does not match any other Chiapas native livebearer fishes. This report is the first record of P. reticulata in the state of Chiapas.

We are very grateful to Vianey Rodriguez, Ivonne Lopez, and Manuel Mathus for assistance during fieldwork. This study was funded by grants # CONACyT A-1-S-19959; UNAM DGAPA PAPIIT IN200820 to GS-M.

The authors declare that they have fully complied with all pertinent ethical and legal requirements, both during the study and in the production of the manuscript; that there are no conflicts of interest of any kind; that all financial sources are fully and clearly stated in the acknowledgments section; and that they fully agree with the final edited version of the article. A signed document has been filed in the journal archives