The “algarrobo negro” (Prosopis nigra) is a species of forest importance, native to the phytogeographic region of Western Chaco. The wood has excellent technological characteristics and is used in the manufacture of fine furniture. The fruits are fit for human consumption, and they are also used as fodder (Giménez & Moglia, 2003). It inhabits arid and semiarid regions, in ecosystems that are very sensitive to anthropic intervention. These areas have been subjected to intense deforestation to introduce agricultural crops to which high doses of glyphosate are usually applied (Felker, 2009). The agrochemicals applied to agricultural crops are carried by the wind towards the native bush, a phenomenon known as drift (Meloni et al., 2019). The impact of glyphosate drift on the growth and physiology of P. nigra is not known.

Although the mechanism of action of glyphosate is known, in some species it has produced damage without affecting the concentration of aromatic amino acids. This observation would indicate that glyphosate could interfere with other physiological processes (Serra et al., 2013). It has been demonstrated that glyphosate has a short half-life, rapidly transforming into aminomethylphosphonic acid (AMPA), which can compete with glycine in the synthesis of chlorophyll, and with other compounds that are essential in plant metabolism (Gomes et al., 2014). Thus, in some species glyphosate decreased the photosynthetic rate, although there are many discrepancies about the mechanism involved. In Lupinus albus, glyphosate decreased the assimilation of CO2 through Rubisco assimilation, without affecting stomatal conductance (De María et al., 2006). In glyphosate-sensitive soybean cultivars, this herbicide reduced the abundance of proteins associated to photosystem II, inhibiting the photochemical stage of photosynthesis (Vivancos et al., 2011). In Phaseolus vulgaris, glyphosate inhibited photosynthesis due to stomatal closure, whereas the photochemical stage was not altered (Olesen & Cedergreen, 2010).

The analysis of chlorophyll a fluorescence constitutes a sensitive and non-destructive method for the evaluation of the changes produced in the photochemical stage of photosynthesis. Recently, it has been used to assess damage to the photosynthetic apparatus under various environmental stress conditions, such as extreme temperatures (Zushi, Kajiwara, & Matsuzoe, 2012), drought (Gomes et al., 2012), salinity (Meloni, Silva, Ledesma, & Bolzón, 2017) and herbicides (Sousa, Farías, Shock, & Bacarin, 2014). The detection of glyphosate-sensitive fluorescence variables can be an important tool for the early detection of damage in forest species.

Under stress conditions, the energy absorbed by photosynthetic pigments that is not used to produce ATP and NADPH usually leads to the formation of reactive oxygen species (ROS; Sousa et al., 2014). These ROS, such as hydrogen peroxide (H2O2) and the superoxide radical (O2.-), can cause significant damage at cellular and molecular levels. Among these damages, lipid peroxidation, alterations in cell membranes and degradation of proteins and chlorophyll stand out (Paiva et al., 2019).

The aim of this work was to quantify the effect of glyphosate drift on the growth, photosynthesis and oxidative stress in P. nigra seedlings.

Doses of 0, 200, 400 and 800 g a.e. ha-1 glyphosate produced by Monsanto Argentina under the trademark Roundup® Full II were applied. The herbicide was applied so that it did not reach the upper third of the seedlings (Tuffi Santos, Meira, Ferreira, Sant’Anna-Santos, & Ferreira, 2007). A backpack sprayer equipped with a handheld boom consisting of two flat fan nozzles TT110,02, spaced 0,5m apart, 250kPa pressure and water volume of 200Lha-1 was used. During the application, the air temperature was 22°C and the relative air humidity was 60%.

Thirty days after the application of the herbicide, gas exchange and chlorophyll a fluorescence emission were measured. Samples were collected for the quantification of aerial biomass and chemical determinations

Chlorophyll a fluorescence emission measurement was made on the same leaves where gas exchange was measured, using a modulated Imaging- PAM fluorometer. Before the measurements were made, leaves were kept in darkness for 30min and covered with aluminum foil. The fluorescence emitted by the leaves was captured by a CCD camera. Minimum (F0) and maximum (Fm) fluorescence measurements were made; from these values, the maximum photosystem II (PSII) quantum yield, Fv/Fm = (Fm-F0)/Fm was calculated (Genty, Briantais, & Baker, 1989). Then, leaves were illuminated with saturating pulses of light to obtain the values of the effective quantum yield of PSII (YII) and the quenching of regulated (YNPQ) and non-regulated (YNO) non-photochemical dissipation. The YII was used to estimate the apparent electron transport rate, ETR=YII . PAR . Aleaf . 0.5 (Bilger, Schereiber, & Bock, 1995). In this equation, PAR is the flow of photons incident on the leaves, Aleaf is the fraction of incident light absorbed by the leaves and 0,5 is the fraction of excitation energy directed towards PSII (Laisk & Loreto, 1996).

Chemical determinations: The concentration of H2O2 was determined by the method proposed by Zhou, Diwu, Panchuk-Voloshina and Haugland (1997), measuring the oxidation of Amplex Red through the production of resophurin. The absorbance at 560nm was read, and the results were expressed in μmol g-1 FM.

The content of O2.- was quantified through the approach described by Elstner and Heupel (1976), measuring the formation of NO2-, from hydroxylamine in the presence of superoxide. Absorbance was read at 530nm, and the results were expressed in nmol min-1 g-1 FM.

The concentration of malondialdehyde (the product of lipid peroxidation) was quantified spectrophotometrically through the technique introduced by Cakmak and Horst (1991). An absorption coefficient of 155mM-1 cm-1 was used, and the results were expressed in nmol MDA g-1 FM.

Membrane damage was measured according to Cerqueira, Silviera, Carvalho, Cunha and Lima (2019). Leaflets were incubated 24h in test tubes containing 10mL of distilled water at 25°C. Subsequently, the electrical conductivity (L1) was measured. Then, the material was incubated at 95°C for 1h and cooled in an ice bath until it reached 25°C. The electrical conductivity (L2) was measured again. Membrane damage (MD) was calculated by the following equation: MD = (L1/L2) * 100. It was expressed in percentages.

Experimental design and statistical analysis: The experiments were arranged in a completely randomized design with six replicates. The experimental unit consists of a pot containing a P. nigra plant. Data were analyzed with ANOVA and Tukey test (P <0,05).

Algarrobo negro growth was significantly inhibited by all the doses of glyphosate. At the end of the assay, the seedlings treated with doses of 200, 400 and 800 g a.e. ha-1 glyphosate had an aerial biomass 23, 53 and 69% lower than the control (Fig. 1). 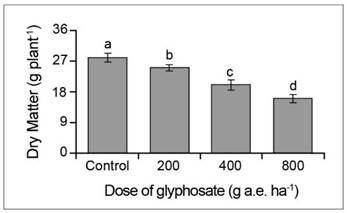 The photosynthetic rate also decreased as the doses tested increased (Fig. 2A). With the dose of 800 g a.e. ha-1 glyphosate, net photosynthesis was 69% lower than in the untreated control. A similar trend was observed in the stomatal conductance (Fig. 2B).

The variables of modulated fluorescence were very sensitive to the stress generated by glyphosate. YNPQ gradually decreased at all doses of the herbicide (Fig. 3A), whereas YNO followed an opposite trend (Fig. 3B). The electron transport rate was strongly reduced by glyphosate; at the highest dose, it registered a 92% decrease with respect to the control (Fig. 3C). In contrast, the Fv/Fm ratio only decreased in the plants treated with 400 and 800 g a.e. ha-1 glyphosate (Fig. 3D). 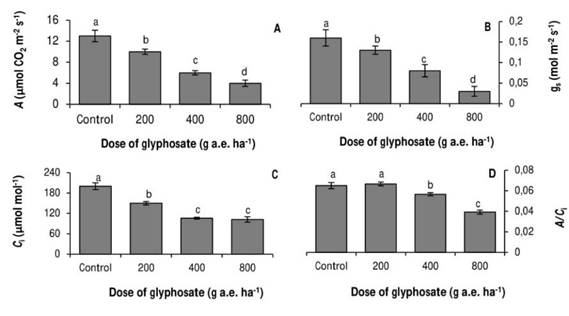 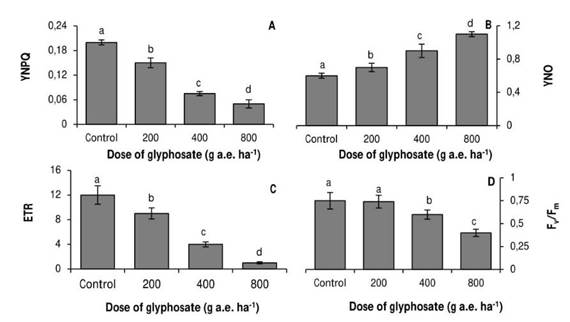 Doses of 200 and 400g a.e. ha-1 glyphosate incremented the production of ROS, increasing the concentrations of H2O2 and O2.- (Table 1). Consequently, oxidative stress was produced, which was evidenced by the accumulation of malondialdehyde and the damage to cell membranes.

Values represent the means ± SD of six replicates; when labelled with different letters, they are significantly different (Tukey test; P < 0.05).

The behavior of the modulated fluorescence emission variables confirms an inhibition of photosynthesis due to non-stomatal components. Thus, for example, the herbicide produced a decrease in YNPQ values (Fig. 3A). Under adverse conditions, plants activate stress suppression mechanisms such as dissipation of excess energy as heat (YNPQ). This variable is related to the thermal dissipation that occurs through the xanthophyll cycle (Niyogi, Björkman, & Grossman, 1997). Therefore, the decrease in YNPQ values may be due to a decrease in carotenoid concentrations, as it was observed in glyphosate-treated Arachis hypogaea plants (Radwan & Fayez, 2016).

The decrease in YNPQ was accompanied by an increase in YNO (Fig. 3B), which was not sufficient to mitigate the negative effects of the herbicide, expressed in the decrease in the electron transport rate (Fig. 3C). This variable manifested a strong reduction, mainly in the doses of 400 and 800g a.e ha-1 glyphosate, which shows an alteration in the photochemical stage of photosynthesis.

The involvement of the photosystem limits the maintenance of electron transport and decreases the production of ATP and NADPH (Ashraf & Harris, 2013). These products are necessary for the fixation of CO2 in the Calvin cycle; therefore, their deficiency inhibits photosynthesis (Dupraz et al., 2016).

Doses of 400 and 800g a.e. ha-1 glyphosate also reduced Fv/Fm values (Fig. 3D). This response indicates that there was either damage on the reaction center of PSII or limitation in the transfer of excitation energy from the antenna complex to the reaction centers (Yuan et al., 2013).

Photoinhibition, demonstrated by the decrease in Fv/Fm values, may be due to the production of ROS, which damages the reaction center of PSII (Huang, Zhang, & Cao, 2010). Reactive oxygen species are generated in plant cells, even under optimal physiological conditions. However, often under unfavorable conditions, there is an imbalance between the rate of ROS production, and the antioxidant systems of the cell. In these situations, an oxidative stress is produced (Corpas, Barroso, Palma, & Rodríguez-Ruiz, 2017). In agreement with this observation, doses of 400 and 800 g a.e. ha-1 produced significant increases in the concentrations of H2O2, O2.- and malondialdehyde (Table 1). Consequently, the selective permeability of the membranes was altered.

Plant species have different antioxidant, enzymatic and non-enzymatic systems. Therefore, their response to glyphosate varies according to the species considered. Glyphosate inhibited the photosynthesis of Salix miyabeana by producing oxidative stress, with increases in the concentrations of H2O2 and malondialdehyde (Gomes et al., 2014). Zhong, Zhonghua, Jun and Chai (2018) attributed the high sensitivity to glyphosate of Hydrilla verticillata to the oxidative stress generated after exposure to the herbicide. Contrarily, the damage generated by glyphosate in soybean cultivars sensitive to this herbicide was not related to oxidative stress, since the plants showed low concentrations of MDA (Moldes, Medici, Abrahão, Tsai, & Azevedo, 2008).

In conclusion, glyphosate reduces growth and photosynthesis in P. nigra seedlings. The inhibition of photosynthesis is due to stomatal closure and alterations in the photochemical stage. At doses of 400 and 800 g a.e. ha-1, glyphosate produces photoinhibition. The latter effect is associated to membrane damage produced by the accumulation of ROS.

The authors are grateful to the financial support by CICyT – UNSE, Argentina.

The authors declare that they have fully complied with all pertinent ethical and legal requirements, both during the study and in the production of the manuscript; that there are no conflicts of interest of any kind; that all financial sources are fully and clearly stated in the acknowledgments section; and that they fully agree with the final edited version of the article. A signed document has been filed in the journal archives.